How to Keep Spiders Away from Your New York Home 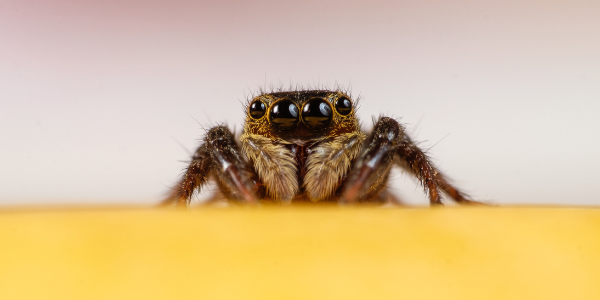 You may think of spiders as a fall or winter pest, spooky surprises that pop up around Halloween. Spiders are one of several common household pests we see year-round in New York, along with ants, roaches, and mice.

While it’s possible for one of our professionals to knock out an existing spider problem in your house, there are several expert-approved methods to keep spiders out of the house in the first place.

There are many species of spiders that show up in New York homes, but these few are some of the most common to look for.

These spiders are fast and have a very quick bite, which can cause a severe burning or itching sensation. They are typically dark brown or black with white markings on the abdomen.

Jumping Spiders have large eyes and move quickly, jumping from one area to another in search of food. They will often build a web for protection but may also live outside in leaves or grasses around your home. The bite of this type of spider is usually not harmful to humans unless you’re allergic to their venom (in which case it could cause swelling).

While not technically spiders, we typically see Daddy Long Legs or Harvestmen grouped into the spider category! Daddy Long Legs have eight long legs instead of six like other spiders do; they also have no venom glands so they cannot bite you! They’re easy-going creatures that don’t bother people unless they feel threatened by being handled too much—then they’ll go into defense mode by making themselves look bigger than usual (which won’t hurt anyone either).

Spiders are attracted to water, so to keep them away, you’ll want to make sure your home is free of any standing water. Spiders can also be drawn in by light and warmth, so don’t leave lights on in unoccupied rooms or let the sun hit windowsills or other areas that spiders might have access to.

Diet-wise, spiders will eat just about anything they come across—including insects, other spiders, and even larger animals—so keep food stored away tightly in sealed containers.

Spider webs themselves can also attract additional spiders! Webs are made of special silk that traps prey as they move through their web; if these webs are visible outside your home or around doors and windows (or even indoors), these signals may attract even more spiders into your home!

How to Prevent Spiders in Your Home

In addition to a pest control plan, there are a few more ways to keep spiders away from your home. One of the most effective methods is to create a spider-free environment by regularly cleaning up webs and dust. A vacuum cleaner will quickly remove webs, dust, and cobwebs. You can also use a broom or mop to clean up the webs around your house. It’s also important to sweep or mop every day so that you don’t have too many spider eggs falling into places where they can hatch later.

If you see any large spider webs outside of your home (for example, on trees), simply sweep them away with a broom or rake them off with some long thin sticks/poles. If there are many large webs in one area around your house, try not only sweeping but also removing them completely as they may contain hundreds of spider eggs! It’s best not to leave any trace behind as this could attract more spiders into the area.

Dealing With Spiders? Let Us Knock ‘Em Out!

You don’t have to deal with spiders in your home! If you’re dealing with spiders or other household pests, we’ll knock them out for you. Call 1-800-244-PEST for an estimate.