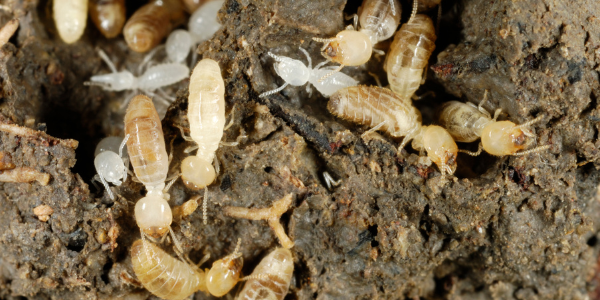 Termite season in New York may peak in the spring, but these destructive pests are a year-round concern for homeowners, destroying wood 24 hours of the day, 365 days of the year. Unfortunately, if your home does end up with termite activity, damages are typically not covered by homeowners’ insurance. For this reason, early identification of termite activity is key to protecting your home and your wallet.

In New York, the subterranean termite is the species you are most likely to deal with. Subterranean termites live underground, building tubes out of mud which they use to travel to wooden structures such as baseboards, desks, floor joists, and other components within a home’s structure. Once there, subterranean termites feed on the cellulose in the wood, quickly wreaking havoc on the affected areas and potentially causing major structural damage.

With this basic understanding of subterranean termites’ behavior under your belt, here are some signs to look for:

We’ll start with the most obvious warning sign of termite activity: noticeable termites! Subterranean termites are usually anywhere from a creamy shade of white to a dark brown or black color. They’re around ⅛ inch long and have six legs, as well as a set of antennae on their oval-shaped bodies.

Keep in mind that termites are often mistaken for ants, especially during the spring swarming season. If you see white, ant-like insects anywhere near your home, it’s likely you have termite activity present. You may even only see part of termites! Be on the lookout for shed insect wings, too, which can be another visual indicator of termite activity.

Is there a spot or two on your walls that’s looking a little…off? Maybe the wallpaper suddenly looks like it’s bubbling underneath or even peeling or becoming discolored. Subterranean termites are known to create damage inside a home that may first appear in these ways. It’s also possible you’ll notice new cracks or holes in your baseboards, sinking ceilings, or even dipping floors.

Termite droppings, known as frass, are another early sign of termite activity to watch for. You’re most likely to see it accumulating underneath door and/or window frames or along the baseboards of your home. The coloring and overall appearance of frass will vary based on what the termites have been feeding on, so the darker the wood, the darker the frass.

As mentioned earlier, subterranean termites build mud tubes from underground which lead them to their food sources in your home. These easily identifiable tubes are made up of soil, wood, and saliva. You will likely see them in a few key areas: along basement walls, under porches, in your home’s sills, joists, subfloors, or window frames.
Stuck Doors and/or Windows
Doors and windows can get stuck for a number of reasons over time, but if this happens in your house, it’s worth considering that you may have termite activity.

Termites frequently target doors and windows with exposed, easily accessible wood. As they begin to feed on the cellulose in the wood, you may experience doors and windows that are more difficult to open or shut all of the sudden.

While early detection is key to preventing severe termite damage, the most effective way to protect your home and prevent unwanted repair costs is to have a proactive termite control plan in place like the leading brand in termite protection, the Sentricon Termite Elimination System.

With the Sentricon termite treatment system in place, stations are placed in the ground around the perimeter of your home. Inside these stations is bait with the same ingredient found in wood that termites feed on: cellulose. When termites enter the stations, the bait is readily available, and they’ll actively feed on it instead of the wooden structures in your home (they actually prefer the bait)!

To ensure your home is protected from termites year-round, call 1-800-244-PEST. We’ll knock ‘em out!