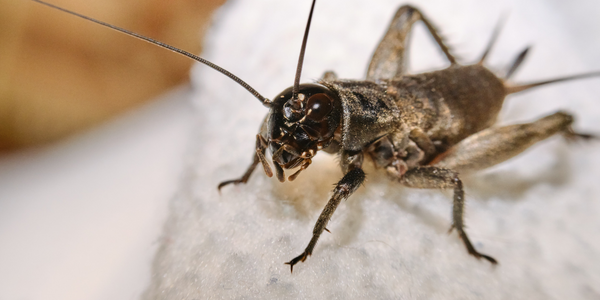 The sound of crickets is a familiar noise for New York homeowners this time of year! For many, their chirping can be heard from one end of your house to another.

Did you know that there are several different types of crickets common to homes and buildings in our area, though? If you find yourself dealing with a cricket infestation this fall, it’s important to know which type you’re dealing with so that you can take the appropriate course of action to knock ‘em out.

The most common cricket you’ll see this fall is the house cricket. These crickets are around 3/4 to 7/8 inches long, with yellowish-brown bodies that have three brown or black stripes behind their heads. Both male and female house crickets have wings, as well as large hind legs that aid in jumping.

Once it starts to get a little cooler outside, they’ll look for a warm, humid environment to stay in, which is why most often, you’ll find them living in areas such as your basement, garage, bathrooms, or kitchen.

House crickets have a varied diet; they’ll munch on plants, dead insects, and even clothing and other fabrics in your home.

Field crickets are a larger species of cricket we see in New York, measuring around ¾ inch long. Their bodies are typically dark brown or black, with long rounded wings and powerful hind legs.

The field cricket is one of the most common species found outdoors, especially in fields, grasslands, and other open spaces; they are also the species most known for the chirping sound associated with crickets. In the fall, they’ll try to enter homes, and like house crickets, will typically be found in moist areas like your basement and/or crawl space.

If you’re looking for an easy way to tell cave crickets apart from other types of crickets, take a look at their antennae. If the antennae are shorter than half the length of their body and very thin, they’re probably cave crickets. These crickets have a humpback appearance and are often found living in caves and other dark, moist locations such as basements and crawl spaces. This type of cricket can grow as large as 1 ½ inch, and unlike the other two species we’ve covered, cave/camel crickets don’t chirp.

When temperatures outside become uncomfortable, cave/camel crickets will work their way inside basements, closets, crawl spaces, garages, and outdoor sheds. They, too, have a varied omnivorous diet with the occasional tendency to eat clothing and other fabrics!

Whether you have a cricket problem or not, it’s important to know what attracts them so that you can avoid having more of them around.

As we’ve covered, all three major cricket species are attracted to warm, damp, and humid places. Reducing moisture levels in and around your home is key to preventing cricket infestations. Here are a few areas to check:

Crickets are attracted to light and will often wander into your home at night if the lights are left on. This makes them especially common in basements, garages, and attics where there is usually no natural light. You should make sure all the lights in these areas are turned off when you go to bed or leave for work in the morning to keep crickets from entering your space.

Crickets will eat pretty much any organic matter including fruits and vegetables, however, if you’re leaving convenient food sources out, such as pet food, then they’ll gladly take you up on the offer. If you feed your pets indoors then make sure it isn’t accessible by crickets during daylight hours when they’re active outside wandering around looking for their next meal.

How to Get Rid of Crickets in the House

Even though cricket populations peaked already this year, the real problem for New York homeowners starts in the fall as crickets start looking for warm places to lay their eggs. If you’re dealing with a cricket problem in your home now, if left untreated, you could end up with hundreds of crickets in your home once eggs hatch in the spring, which is why it’s always best to knock ‘em out before they become a major nuisance.