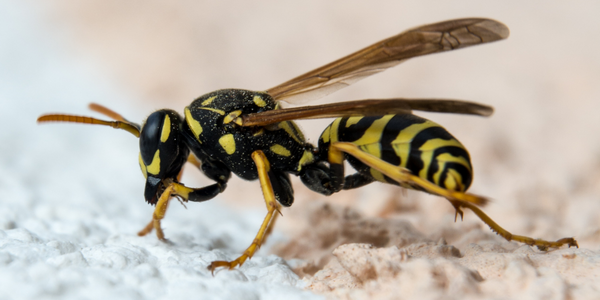 Seeing stinging insects like bees, wasps, and hornets in your yard probably feels like an inevitable part of summer in New York. As some of the most active pests we see this time of year, it’s likely you’ll find these pests buzzing around your yard for a couple more months. Here are a few stinging insect facts that’ll help you better protect yourself from getting stung this year.

Bees are social creatures that live in large colonies with thousands of other bees.

You’ve probably heard the saying “busy as a bee.” Well, that’s no coincidence! Bees are social creatures that live in large colonies containing thousands of bees. The queen is the only female who lays eggs and controls the activities of her hive. She also produces chemical scents called pheromones which keep her workers motivated to go about their daily tasks with enthusiasm.

The average colony consists of several thousand worker bees, hundreds of males called drones, and hundreds to thousands of larvae at any given time. When you see a bee flying around your yard or garden, it’s likely working on behalf of its colony nearby—and if all goes well for that colony, you’ll see them again next season!

Most wasps have lifespans under one year.

While the lifespan of any given wasp depends largely on its species, in general, most wasps live only a few weeks or months, and a queen can live up to a year.

European hornets’ stings can cause pain for hours.

These insects are usually docile and will only sting if they feel threatened or need to defend their nests. However, when provoked or guarding young, European hornets will attack relentlessly with stings that can cause excruciating pain for up to 12 hours.

Honeybees can only sting once. Bumblebees can sting multiple times!

Bumblebees can sting multiple times, but honeybees can only sting once. This is because their stinger becomes detached from their body after they have stung. As such, the honeybee dies with its first use (which explains why you’ll rarely find a dead bee on the ground or in your home).

The bumblebee, on the other hand, has two barbs on its stinger which serve as anchors for it to remain in place even after it has been used. This allows it to sting repeatedly until the threat has passed.

The Africanized honeybee is also known as the “killer bee” because it can be very aggressive when defending its territory.

Their attacks on humans can be deadly because unlike other types of bees who only sting once when defending themselves from predators or intruders into their hives (e.g., humans), these pests will keep going.

Hornets are considered a delicacy in Japan.

Hornets are considered a delicacy in Japan where they are often served as a snack. They have a sweet, spicy flavor and can be eaten raw or cooked. A serving of hornets is packed with protein, vitamins, and minerals—it’s an all-around healthy snack!

Yellow jackets typically build their nests in the ground. If you’ve noticed a large, yellow and black wasp buzzing around near your home, chances are it’s a yellow jacket.

Yellow jackets are also called “meat bees,” because they often visit picnics and barbeques to feed on the leftover food. Yellow jackets can sting multiple times without dying themselves because their venom contains an ingredient that prevents them from feeling pain while they sting their victims multiple times!

Stinging insects like bees, wasps, hornets, and yellow jackets send more than 500,000 people to the emergency room each year.

It’s worth noting that most stinging pests won’t attack unless they feel provoked, which is why getting too close to their nests or swatting at these pests is never a good idea.

Buzz Off Stinging Pests This Summer

To prevent stinging insects in your yard this summer and fall, we recommend an ongoing pest control service from Knockout Pest Control. Call 1-800-244-PEST to request an estimate.