How to Tell If Your New York Home Has Termites 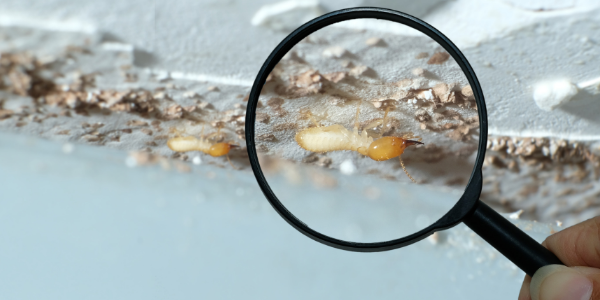 Termites are one of the most expensive pests New York homeowners deal with, and termite infestation service calls are our most common type of service call at Knockout Pest Control.

On top of the severe damage termites can cause to the structure of a home, repairs for termite damage are generally NOT covered by homeowner’s insurance, meaning those steep repair costs most often must be paid out of pocket.

Your best bet against termite activity is always going to be to have a home warranty in place before termites wreak havoc on your house, however, it’s helpful to be able to recognize potential termite activity, so you can have one of our professionals take a look at your home and make the appropriate recommendations for moving forward.

Here are the signs you could be dealing with a termite infestation:

The Types of Termites to Look for in New York

To know which signs of termites to look for in your New York home, first, it’s helpful to understand the sort of termites seen in the New York area. While there are a few key termite species seen across the United States, including dampwood termites and drywood termites, in New York, we primarily deal with subterranean termites.

Subterranean termites build large colonies in the soil beneath and around homes. Typically, they enter a home through wood that’s making contact with the ground, or they’ll even construct distinctive mud tubes (more on those later) that lead from the ground to the wood they infest. Subterranean termites eat cellulose in wood, an organic compound, 24 hours of the day, 7 days of the week, which can equate to severe damage to the wooden components of a house quickly. If undetected or neglected over time, subterranean termites’ damage can actually cause a complete collapse of a home.

The 5 Most Common Signs of Subterranean Termites

Subterranean termite infestations can happen on the inside of your home, the outside, or even in areas you may not immediately notice or have easy access to. A telltale sign of termite damage “across the board” is damaged wood, and a few key places to check for it include wooden decks or porches, in your basement or crawl space, underneath flooring, and along window frames.

As termites infest a piece of wood, they’ll leave behind various splits, cracks, and grooves. If you knock on a suspicious piece of wood and hear a hollow sound, that, too, is a likely indicator of termite damage. Over time, repeated damage adds up and can threaten the overall structural integrity of your home.

Earlier we mentioned how subterranean termites use mud tubes as a means of moving from the ground to the wood they infest. These tubes are composed of soil, wood, and termite saliva, and it’s common to see them pop up around basement walls, sills, joists, subfloors, window frames, and under porches.

If you notice what appears to be insect wings piling up, especially near window or door frames, you are likely dealing with a termite infestation. This is incredibly common in the springtime when reproductive termites swarm near well-lit, warm areas, then shed their wings since they’ll never need them again.

Frass is another word for termite droppings, and it is another indicator of an underlying termite problem. It generally builds up under door and window frames and along baseboards and wooden porches, where it will vary in appearance based on what kind of wood termites have been feeding on; if a termite has been munching on a darker wood, they are going to have darker frass.

A surefire sign of termites? Termites! Subterranean termites are usually a creamy white to dark brown or black color, around ⅛ inch long with six legs and a set of antennae, and long, narrow, and oval-shaped bodies.

Keep in mind that termites are often mistaken for ants, especially during the swarming season. If you see white, ant-like insects anywhere near your home, alert! You probably have a termite infestation!

Dealing With a Termite Infestation? Knockout Pest Control Will Knock Them Out Fast

In New York, it’s not a matter of “if” your home gets termites, but “when” your home gets termites. Your safest bet against termite activity is a thorough home inspection by a licensed termite inspector from Knockout Pest Control, followed by the use of proven, cutting-edge termite baiting systems that eliminate all of the termites in a colony, including the queen.