5 Late Summer Spiders to Watch For 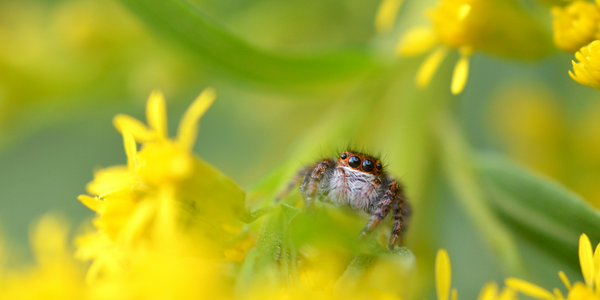 Spiders are some of the most common pests New York homeowners deal with year-round, and they’re also one of the most feared. Even if they are considered beneficial for eating other insects, and few spider species are truly dangerous, it doesn’t change the fact that most people don’t want to run across one in their home!

To help you better recognize the types of spiders you may potentially see in your own home, here’s a list of five common species and what to do if you find them indoors.

Wolf spiders are common across New York and the entire United States. If you spot a large brown spider as large as 1.2” long creeping around your garden or in the dark crevices of your home, chances are good that it’s a wolf spider.

No one is quite sure why wolf spiders have earned the name “wolf,” but it may have something to do with their hunting technique: like wolves stalking prey in the wild, wolf spiders sneak up on insects using stealthy movements and then pounce on them suddenly with lightning-fast reflexes.

Wolf spiders are not aggressive by nature but will bite if provoked or threatened—and their bites can be painful!

The house spider, or as it’s also often called, the American house spider, is common in New York. While they might look creepy, they’re won’t bite or sting, and in general, are not aggressive towards humans. These spiders are considered synanthropes, meaning they’re a member of a species of animal or plant which lives near and benefits from an association with humans and the habits humans create, like gardens, farms, and you guessed it—homes!

House spiders vary in color from tan to nearly black and may have a variety of patterns on their bodies, as well; they’re usually no more than a quarter of an inch long, and virtually harmless (aside from creeping people out).

Daddy long legs (otherwise known as the harvestman or opiliones) look like spiders, but are not considered to be spiders by technical definition.

Interestingly, harvestmen don’t spin webs; instead they eat insects they find, and are harmless to humans. The males are smaller than females; both sexes have long bodies with small heads and large eyes that face upwards towards leaves or other foliage where they might spot tasty prey.

Believe it or not, jumping spiders are a common type of spider in New York that can jump up to 50 times their own body length. These spiders are usually black with white markings and measure about the size of a quarter; they also have eight legs, two fangs, and eight eyes.

Jumping spiders typically live outdoors in garden areas where they spend most of their time hunting for insects or munching on pollen. Inside, they gravitate toward windows and doors, because those are the areas where other insects are likely to be.

Sac spiders are another common spider in New York. These pests are generally found in gardens during the warmer months but will work their way inside the home seeking indoor shelter in the fall. They’re usually around a quarter inch to nearly a half inch in length and have light coloring that is yellow, pale green, or tan.

Unlike most of the other species we’ve covered, sac spiders have been known to bite humans when they’re feeling defensive, however their bites are less serious than those of some other spider species such as the brown recluse. There have been reports where the venom has caused severe swelling and redness around the area where they were bitten.

Knock Out Spiders in Your Home

While there are many spiders in New York, hopefully it’s reassuring that most of them are fairly harmless and likely much more afraid of you than you are of them, but we get it—pests aren’t welcome in most New York homes!

If you do find yourself with a spider problem, Knockout Pest Control is your local expert at knocking out spiders and keeping them down for the count.